Petra Verberne (Helden, 1937) started collecting art in 1990. Driven by idealism, she offered a platform to a ‘forgotten art discipline’. She wanted to pay tribute to ceramic art and draw attention to the artistic aspects of contemporary ceramics. Her collection contains ceramics from the Netherlands and Europe. She collected with an eye to current developments in ceramics.

In 2012, Petra Verberne donated fifty pieces to Keramiekcentrum Tiendschuur Tegelen, and again, in 2018, well over two hundred pieces. The highlights of these donations are now on show at the ceramics museum in Tegelen.

Her passion for art was born during her studies of German, her main subject being German literature. She already started collecting art at the age of 18, at first it was mainly drawing and painting art. Around 1990, Petra Verberne chose a different direction: contemporary ceramics became her objective. She says about it, “Everyone has a certain image in their heads with the words ‘potter’, ‘ceramicist’. What I try to show is the freedom ceramicists have acquired in their craft in the past quarter century. Many have progressed to become free artists. The starting point here often is the pot, bowl or jug, now, however, designed freely, no longer serving for daily use. In short, objects in their own right, which are agreeable to look at. Finding and collecting these objects is my aim.”

Once Petra Verberne had decided to collect ceramics, she operated from the basis of the history of art. According to her, ceramic utensils are as old as humanity itself. These objects give information about rituals and customs of peoples. Part of her collection comprises this ‘arch-ceramic’ stock of pots and water vessels as they are still made, for instance, in Africa.

From these very first ceramic forms the traditional potters in Europe developed ever finer and better functioning functional ware. Until industrial production took over from them. The craftsmen, in turn, developed into designers and another part into free artists. This latter group deliberately started to form unique objects from clay manually. Sometimes, they still made functional ware, but more and more often purely autonomous pieces. This development has been going on roughly since 1950. The makers don’t call themselves potters, but ceramicists.

Another part of the ceramic ‘archetypes’ with which Petra started her ceramic collection consisted of jugs. She considers a small jug the ceramicist’s visiting card. It shows that they can throw a pot, make a spout and a handle, decorate and fire, in brief, that they have a thorough command of their trade. Another part in her collection are ‘small boxes’: these, too, underline, with perfectly fitting covers, the maker’s craftsmanship.

Her curiosity for other greater work was born out of the functional ware forms, She travelled all over Europe to visit numerous ceramics exhibitions. Well-informed about the latest developments and with the eye of a connaisseur, she bought a ceramicist’s most representative piece. In this way, she built her impressive collection: an international collection of free, ceramic objects, with a great mutual diversity.

Petra Verberne has been an esteemed guest at the Tiendschuur for many years. She regularly purchased work from the exhibitions. This has created the unique situation that her collection is a reflection of part the museum’s exhibition history. In 2005, the highlights of her collection were on show at the museum.

After 30 years’ collecting, Petra started looking for a good place to house her collection. The chance of the Tiendschuur receiving her complete collection as a donation was substantial. Unfortunately, it didn’t materialise due to lack of space and lack of funds to move the museum to a more spacious location. After this, she donated a part of the collection to the Grassi Museum in Leipzig and a part to the Boymans Van Beuningen in Rotterdam. Fortunately, the Tiendschuur  was not completely out of the picture yet. In 2012 and in 2018, she donated a total of nearly 275 pieces to the museum.

Her mission is accomplished, but not finished yet. For as long as she can visit exhibitions, she will occasionally buy work….

The highlights from her donations to the Tiendschuur are on show from 18 January – 7 April.

The exhibition opens on Friday 18 January at 16:00 and will be introduced by conservator Sacha Odenhoven.

On the data below, Petra Verberne will be present in person and tell the visitors about her collection, each time from 14:00 – 16:00: 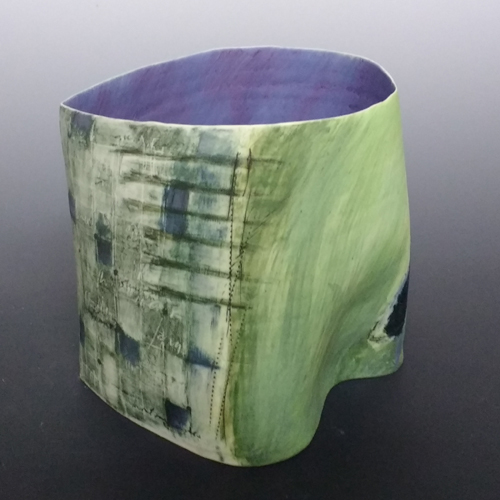